We recently asked some people who enjoy Fate Core what parts they found confusing or complicated. We have already covered the most selected response, Aspects and Fate Points here, and here. We plan to also look at Refresh and Stunts in the near future, but right now we wanted to cover a more general area of just complications in general and how they were dealt with.

I guess we are doing a whole series of things on this poll. 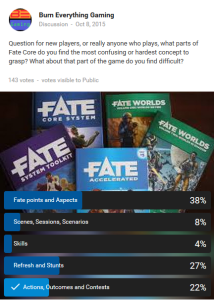 So today we are going to look at some examples of Fate Core situations that got very complicated. It gives me a chance to walk down memory lane, and more importantly it gives us the chance to look at how the rules handle some of the crazy madness that comes from actually playing the games.

So let’s dive right on in.

For a Fate Core one-shot in a medieval fantasy setting, a group of adventurers found their way into a castle’s hoard guarded by a collared fire-breathing dragon. The group did not have many fighters, so I was expecting a social encounter. Instead, the group decided to get creative with what skills they could use for attacks. The chef wanted to use Crafts to attack the dragon with pepper, and the librarian wanted to make the dragon explode from the inside by emptying their magic bag of holding (effectively attacking with Lore).

Now while the chart in the Fate Core book only lists 3 skills you can Attack with (Fight, Shoot, and Provoke), the wording under each skill allows for exceptions. These should not be common and should have a cost (either a stunt that always allows it or spending a fate point for story effect). That or you can agree to the changes in campaign building if it is going to be a frequent thing.

Now this was a one-shot, so I was not particularly worried about breaking the campaign in the long run. And there were in-game justifications for these skill attacks: the cook had a stunt that allowed her to use Crafts for cooking, and the librarian had a Bottomless Bag of Books aspect that I’d agreed to. Not to mention the strong PC was grappling the dragon that was already chained to the wall, and the other pc volunteered to get swallowed and empty the bag of books from the inside on behalf of the librarian.

Now if I remember correctly, the rules state that you have to spend a fate point to justify something in the game (and have an aspect that makes it make sense). I allowed the players to use up free invokes or take compels (getting swallowed) to allow these to happen. Generally I like to invoke Fate Core’s silver rule in these sorts of things: narrative sense outweighs rules. But there is a right way to do these sorts of things, and everyone involved should at least be aware that this is an exception to the rules. Otherwise you will end up with player saying “But this one time you said it was ok, so I should be able to do it now!”

Character arguments can be fun, but player arguments are just frustrating. The real thing you need to do in Fate Core is negotiate with your fellow storytellers.

I once had a campaign start up where, on the first adventure, the party decided to completely ignore my plot hooks and go explore an Egyptian pyramid. The first trap I had set up was really just a collapsed ceiling that was blocking the path. One player tried to plow right through it, and so I used the Unstable Structure aspect to cause more of the ceiling to collapse. It hit all 4 players for 5 points of physical stress, and they all rolled low. So they decided to take themselves out of the conflict.

This was supposed to be a simple obstacle to overcome, and I thought that I had stated clearly enough now they would need to be careful in clearing away the rubble. Now I was looking at a TPK early in on what was supposed to be a long-going campaign. So what should I have done? Had them buried and then have an NPC bail them out? Could have made for a good story, but then the players would probably not take the rest of the traps very seriously.

So, believe it or not, you can compel players to take a consequence rather than be taken out. Compels allow you to give the character a decision to make in order to make the story interesting. You could, for example, compel a player to take a Sprained Ankle mild consequence and then tell them that they have to dig out the rest of their party or everyone else will die. And the character will blame themselves.

Suddenly the entire group feels the pressure of what is really happening, and everyone is cheering the remaining player to succeed. The reality of death sinks in, and everyone is more cautious. And best of all, no rules are fudged to cover up any mistakes.

Too Many Kung Fu Aspects

For a kung fu game, the group was finding their attacks largely ineffective against a martial arts master. And so they decided to use some Create an Advantage checks in order to give themselves a boost for one mega attack. Unfortunately this started to become a problem when, after 3 rounds of buildup, there were so many aspects on the scene that it was becoming a mess of note cards and notes. And when the attack finally did happen, it took us a good 4-5 minutes to add up everyone’s advantages with +2’s to see how much damage had been done, which ended up not being enough. So the players felt like they had to start all over again, and I think they felt a little cheated because they had not done the math correctly.

Now despite its name, the Create an Advantage action does not just allow you to create a new aspect. It also allows you to add free invocations to an already existing aspect or a boost. And when a boost gets more free invokes from a Create an Advantage action, it becomes a real situational aspect that won’t go away after a round. So encouraging a group to come up with one big aspect (The Riker Maneuver, Coordinated Attack, Battle of Masters, etc.) that they can keep pushing the free invokes on.

Free invocations are awesome! You can spend as many as you want on an action even if they are only attached to one aspect. And you can trade them freely among other characters on your team, so teamwork is still encouraged. If the group does not like that idea, figure out what the objection is. It could be that you have some individualists that want to keep track of which free invokes are theirs. If that is the case, maintaining and advancing one aspect per player is a good compromise.

The Golden Rule of Fate Core states that one decides what they wish to accomplish first and then consults the rules to help. The silver rule states that narrative is more important that the rules. I would add the implied bronze rule that consistency and consensus define the rules for each game.

In other words if you come across a situation that seems confusing mechanically, make sure everyone understands what is trying to be accomplished. Try to narrow the results down to the 4 basic actions of Fate Core, and then so long as everyone agrees on a solution go with that solution! What is most important in Fate Core, according to the very people that designed it, is not how the story is told but rather the telling of the story its self.

Feel free to send us comments, questions, and share your own interesting roleplaying experiences. Next time we’ll be moving on to the second place result of our poll on difficult concepts to grasp: Refresh and Stunts!

Join 320 other followers
My Tweets