Star Trek: The Next Generation Interactive VCR Board Game is a cooperative board game. Every word in the title is technically correct, while at the same time being a gross overstatement. 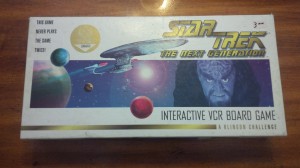 (Editors note: Burn Everything Gaming would like to give an apology to Decipher, Inc. We know we promised we would get right on writing a review for your game, but some things came up and we got to it as soon as we could. Thank you for understanding)

Point of view of the Reviewer

The reviewer for this game is both a Star Trek and Board Game fan. He also grew up at the perfect time to think everyone on the USS Enterprise was awesome (except Pulaski. TEAM Crusher). This reviewer enjoys almost anything Star Trek and when it comes to board games he enjoys a good story.

Seeing as this game is over 20 years old I was interested to see what components came with the game. I don’t remember much about the Before Time, but I do remember most board games having lots of cards, figures, and stickers. I was not disappointed with this find.

There are stickers for ranks as well as communicator badges (though most of them had already been used up. A common finding in older games that relied on stickers). There were even a few decks of cards and a spinner.

Oh, a spinner. For all those out there that have never played a game with a spinner you just don’t know what you are missing. Having a spinner in a game is like a game itself. Everyone takes turns trying out the spinner as you open up the board and one by one we get to find out how much the spinner does not live up to its name. Luckily, through some infinite wisdom in the board game gods, there is usually one person who has the magic spinner touch. This person has that beautiful ability to know how to hold the spinner just right so it actually does what it was made to do. That persons new title is “The Spinner”. Yes, it is unimaginative, but it is a holy name that shall not be questioned.

Setup for this game is pretty easy.

This is where the fun begins. Now that you have your role on the ship and your little tricorder, we introduce 1993’s height of video entertainment: 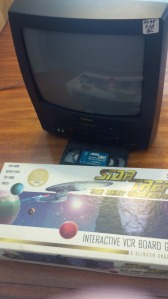 Clarification: The Reviewer did not spend $29.95 on this beautiful TV/VCR combo. There are some things he just will not do.

In the Before Time, there was something called a VCR. It played VHS tapes. No one knows what those acronyms mean, so don’t even ask. Someone in our play group suggested they hook up their old VCR to a new TV and none of us would have that. We wanted to totally immerse ourselves in the early 90s that was this game. The X-Files were about to be on TV, Bill Nye WAS on TV, and Toad the Wet Sprocket were a popular band. So, basically nothing has changed. We jumped right in.

The actual mechanics of this game are really boring. You roll a dice and you move that many spaces. You are trying to pick up things to give you access to rooms to pick up other things so you can finally make your way to some place else and do the thing that ends the game. You don’t really get a lot of control in what you are doing. A lot of older games have this same play style (Monopoly, Sorry!) and it can be very boring.

What makes this game more interesting is the VCR portion of the game. Once you put the tape in it starts a countdown timer and you have 1 hour to finish the game before you lose.Things happen during that time that can change what happens during the game.

You may notice that in the top left corner of the box it says “The Game Never Plays the Same Way Twice”. This is technically true because different people will be taking their turn during different times of the countdown. This is the only way that sentence is correct.

The Flavor is the only saving grace for this game. If you like Star Trek you will most likely love this game. The story is simple, and basically the same idea from the ST:TNG episode “Starship mine”. The Enterprise is docked at a Starbase for repairs. Everyone is off the ship. The players are repair technicians from the Starbase making repairs when a Klingon sneaks on board and, somehow, steals the Enterprise. His mission is to blow it up and start a war between the Klingons and the Federations.

Kavok, the Klingon, is played wonderfully by Robert O’Reilly. He isn’t playing Gowron (*Insert Legal Words Here*), but this Klingon has a similar flair. You spend the game going around getting supplies to break into the bridge and take him down before you reach Klingon Space. Randomly (at a preset time based on the countdown timer on the tape), he will call you over the intercom (TV) by your rank and make you do something. He will give different people different names and randomly activate forcefields. Whoever gets to him first gets to knock him out with a phaser and be rewarded with a medal.

Should You Play This Game?

Should is a very strong word. If you are a Star Trek fan and want to experience some campy Star Trek goodness, then yes, you should totally play this game. Not a Star Trek fan? If you really wanted you could give this a try, though I don’t think it will be quite as enjoyable. Want to drink, throw a dice around, frantically move cheep cardboard cutouts of people around a game board while someone on a magical device from 20 years ago calls you names? Yes, you definitely should play this game.