When you and your friends sit down to an RPG you invariably get to the question “what characters should we choose so we can be successful?” The answer to this can often be different based on the types of players and the type of campaign you are playing.

What we would like to remind you is that at the core of playing an RPG game you are trying to tell a story. No matter the setting/world/system, a way to guarantee enjoyment in a story is to have some kind of drama. In a physical campaign like a D&D game or Pathfinder game, this drama can usually come from the fighting and the chance of death. In other systems the drama can come from a more social aspect and how the different characters interact and what happens after. No matter what kind of campaign or system you are running, we have the 4 types of characters that can guarantee you a successful campaign.

We believe, that to tell a successful story you should use these 4 character roles: stick, stone, rubber, glue. Now, the idea of having 4 different character types in a successful story is nothing new, if you are familiar with Humorism this may seem very familiar. There is even an interesting CRACKED video  that covers that as well as a TV TROPES. The types of characters we are going to be talking about have different temperaments and provide a different purpose. We believe these 4 types of characters ensure a longer more successful campaign.

Below, Joshua and I have a little conversation on these 4 character types. Enjoy! 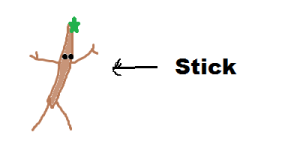 J: This is the player that instigates trouble. As soon as you read that, you thought of someone didn’t you? These characters are memorable because they make things happen! Poke a dragon with a stick. Mention how fat you think the grand vizier is. Throw a rock into the minefield. These characters are driven by curiosity to unravel secrets and keep the story interesting.

T: If we are talking mechanics in a physical campaign, like a D&D or Pathfinder game, this could be described as the Glass Cannon. They can poke something really hard with that stick, but if that thing pokes back just as hard they are in trouble. In more of a social campaign this could be the character that is always getting under peoples skin for a reaction. This is also the character that maybe doesn’t do that on purpose, but something inside them drives them to learn more and get more information. Think of the scientist who says he can do something, but never asks if he SHOULD do something.

J: This type of character is necessary to a group because they provide direction. A character designed to be a stick can manipulate social settings to their favor, often getting the party better rewards for a quest or altering a conflict to a type that the group is better equipped to handle. And they often have access to information that others do not thanks to their curious nature. These are your wizards, deckers, air benders, Tellarites, and Donatello wannabes.

T: With the stick always going around poking things, for better or worse, sometimes you are going to poke something that shouldn’t be poked. It is going to poke you back and that is when you need a character that can take the poke.

J: Which brings us to our next role…

J: This is the player that uses simple solutions for every problem. Most commonly they are the physical type, though they do not always have to be. Kick down the door, attack it if it moves, and intimidate everyone you don’t like. These characters are driven by the one aspect of the story they love the most, and they are very good at acting on that aspect.

J: And when he does get a reaction, we all know what that reaction will be, right? You really need one of these characters in your party. Someone that is very good at doing what they do, someone you can rely on whenever things take a turn in that direction. Stones provide a safety net of certainty because they are predictable. They can be combat masters, scientists unwavering in logic, or masters of sarcastic wit. These are your fighters, street samurai, earth benders, Vulcans, and Raphael wannabes.

J: This is the player that adapts to every situation and often adapts themselves as well. Let’s face it. If you are going to have a stick causing a variety of problems and a rock that can only deal well with certain problems, then you need someone that can spread themselves out a bit. Learn lock picking, cooking, and underwater basket weaving. Persuade the crowd that these aren’t the droids they are looking for. Convince the paladin that burning the village down is for the greater good. These characters can put a positive spin on anything the stick stirs up.

J: These characters are necessary in every campaign because any GM knows to throw variety at their party. The direct approach is not always going to cut it, and the rubber is a master of finding alternative solutions. Problems seem to roll off of them like water on a duck’s back, or butter on a bald monkey. The control mobs, stir up crowds, and find their way around deadly traps. These are your rogues, faces, fire benders, Trills, and Michelangelo wannabes.

T: Having all these different roles interacting with each other can get very chaotic. The group can easily find itself without purpose or true direction. That is where the next role comes into play.

J: This is the player that keeps the party together. You absolutely MUST have someone playing the glue if you want the campaign to last more than one adventure. Heal wounds. Be the moral compass. Settle group conflict. Buff party rolls. While the other types are great at dealing with (and causing) conflict during an encounter, the glue prevents the consequences of those encounters to end the party’s career before the next adventure.

T: I agree. Without this character your party is going to tear itself apart. This could be the simple mechanical issue of healing a party in a normal D&D/Pathfinder campaign, or it could be that character that is pure of heart and keeps the party on just this side of moral. Where the Rubber is good at manipulating things in the environment, the Glue works on things inside the characters.

J: Ironically the glue is often overlooked as a necessary addition to the team, and I suppose if you always roll natural 20’s and never find loot that does not divide evenly it is technically possible to do without them. But realistically, if you want to enjoy playing together, you have to have a character dedicated to the party’s motivation. They make the game more fun, and they keep the overall story making sense. These are your clerics, mages, water benders, self-sacrificers, and Leonardo wannabes.

T: I got nothing. Want to start it off?

J: Sure… One final note before we brace ourselves for the flood of responses. Clearly not all groups are going to be exactly 4 people. Sometimes you get 3 players, and sometimes you get 5. How do you go about making sure that all 4 roles are covered when you do not have exactly 4 players?

T: That is a good question. I am wondering, like everyone else, what the answer is.

J: Oh dear. Really? I was hoping you would have an answer.

T: I can try. If you find yourself in a group, think about what role your character is doing. Are they being a stick, a stone, the rubber, or the glue? It is very easy to be a mixture of multiple characters. Once everyone figures out what roles each character is filling, see if there are any roles missing. If, between the 5 of your characters you realize none of you are acting as the glue, maybe one of you can make your character more interesting by picking up some of those traits. If you are playing in a 3 player game you can do the same. Your thoughts?

J: Sounds like a good solution to me. I imagine some roles can be shared as well. A bard, for example, would be a good stick and glue combination. And if everyone is playing a Star Trek campaign, then there should probably be a little rubber in all the characters.