We asked some Fate players things they found confusing about Fate and below are the results. 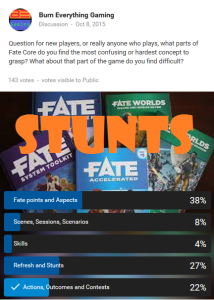 Aspects and fate points can be challenging to understand, but with some patience and an understanding group you can usually get past the challenges with some easy rulings. Something like “I see what you want to do, but it doesn’t really make sense for the story right now,” can simply bypass a confusing situation all together.

Stunts, on the other hand, can’t really be bypassed. Once they are created, they are there. Once a player takes it and pays for it, it is a real part of the game. If it is too powerful, a GM cannot bypass it so easily. If a player doesn’t know how to use it, it becomes a waste of their refresh. And since stunts are persistent, any problems they cause will not go away after just one session.

Probably the MOST confusing thing about stunts is the open-ended invitation Fate Core makes to design your own with a pirate’s code analogy of guidelines. How can players and GMs judge what stunts abilities will fall in that sweet spot of “limited enough in scope to feel special when you use them, but not so narrow that you never see them come up?” Especially with a game like Fate Core where everyone works together to driver the story.

We’ve touched a bit on making stunts before, and we probably will again soon. But for now let’s take a look at 3 rules when dealing with stunts, three things that you must never EVER do.

Fate Core is a story-driven game. Everything should always be done with the interest of the story in mind. The spotlight should shine on the narration, not the mechanics. When you are more interested in squeezing the best bonus out of the mechanics of your stunt it can be detrimental. This is because you have to justify everything in Fate to fit the story, and thus squeezing and stretching the rules also does the same to the story.

For example, the only way to get a +3 out of a stunt (instead of the normal +2) is to be doing something very specific under very specific circumstances. Say, for example, that someone is playing a thief that was once a fire fighter. They might have a stunt Burning Exit Plan that gives them a +3 to Escape with Overcome when the building is on fire. This is a great stunt for dramatic effect as it highlights how a part of their past still comes with their future.

Perhaps you can already see where this is going to go poorly? The player character gets his dramatic moment and decides that bonus is really useful. So the next time they are stealing from someone’s home or an office building and they trip an alarm, they set the place on fire to more easily escape. They become more worried about the bonus than the reason they took the stunt. The story has to adjust, so now the character is an arson and the GM will have to adjust the story to prevent the continued use of such a powerful stunt.

Fate Core was originally a pulp fiction game, rife with lots of drama. Stunts are supposed to be those extra special moments when you are likely to do something amazing. That’s why they cost a refresh, trading you a permanent fate point for a permanent ability. But when you add water to a stunt, metaphorically speaking of course, it loses its reason for being a stunt.

For example, using a stunt that gives you a +2 shoot when you are outnumbered may be a specific circumstance, but if you are using it for a massive combat where you are pretty much going to be outnumbered the majority of the fight, then there’s nothing really special about it. Sure, you are grateful for the +2 every time you attack. Why wouldn’t you be? But it is no longer special. They uses of this stunt have multiplied out of control.

Now it may not seem like a big deal at first. What’s so bad about getting to use a stunt several times in one scene? If the player thinks that a point of refresh is worth more than 7-9 skill points to get that +2 all the time, then what is the problem?

Fate Core is built on small numbers: -2 thru 8+. A +2 makes a huge difference (as it should), and having that bonus come to you so easily really throws of the balance of the game. When you have a solution that works much better than others, players are going to gravitate towards it. Other players are going to want stunts of equal power to help balance out, and then the GM is going to have to adjust the difficulty of the game to make it feel challenging. It’s a vicious cycle that can easily overwhelm a game, and sometimes no one actually understands what is going on until it is too late.

You do not necessarily need to change a stunt’s wording in order to fix this problem. Instead, try roleplaying a little more variety. Make sure you do not do the same action two turns in a row. Mixing it up between different types of Attacks or maybe between Attack and Create an advantage. This will branch out to more possibilities and add some good variety in your scene.

So for our Slick Sharpe Shooter example, go ahead and use your +2 bonus to attack the first round. The next round, try to lay down a Cover Fire advantage so your friends can maneuver a bit. Then tap some consequences on round 3 and shoot at anything moving you aren’t sure is a friend. On the 4th round, if you are still outnumbered, use that stunt again and aim for the ringleader. Mechanically it is much more interesting, and the variety for the story does not make anyone feel like you are abusing the system.

No Feeding After Midnight

This is really the heart of the matter, the thing that takes the other 2 problems and blows them out of proportion. Yes, it is still bad to focus on stunt mechanics only and yes, it is still bad to overuse your stunts. But where the real abuse comes from is when you bulk a stunt up more than you should. THIS is when the stunt becomes a terrifying monster.

Building a stunt is incredibly tricky, but the basic idea is that a stunt gives you a bonus that you would normally get when spending a fate point. This is why they are worth 1 refresh, they can do about the same thing so they are worth about the same. Putting too much power, feeding it past its limit, will ruin your game. Even if it just seems like a tiny insignificant bit at first.

Monster stunts give you too much oomph for too little cost. This could be anything from a stunt that give you a +4 bonus to one skill and a -2 to another skill (but you can get around that penalty since you are not using that other skill) or too much freedom in word choice (it is meant to give you a +2 to defend actions when someone is attacking an ally, but all it says is you get a +2 to help an ally in need) to effects that fate points would be rejected to (create a free aspect on a scene, regardless of contradictions).

Seriously, if a stunt gives you +4 to dodge with Athletics and a -2 to Lore for the rest of the scene, then you’ve likely not thought of how little Lore is used in combat. If a stunt gives you a bonus to a skill but does not specify which of the 4 Actions it is used for, you really should insert that. And if a stunt allows for the unopposed creation of a wormhole in every scene, no matter how easily it is to remove that aspect on an NPC’s turn, you’re begging the player to break your game.

And don’t even get me started on when the GM starts putting these monsters on the NPCs.

Monster stunts, like zombies and demon imps, are mindless horrors that should be killed on site. Change the wording if it helps. Replace them after the session is over if you must. But get rid of them! Not to add any pressure when you are designing your own stunts, but these are bad and will mess your campaign up if you are not careful.

Bravo to anyone that got why those 3 rules are worded the way they are. It is almost Halloween after all.

Building stunts is a lot of fun, especially for those of us that don’t often get to build playable characters. We’ll take a look at some of the less horrifying aspects of that very soon and discus the different types of stunts and what all you can do with them.

I also recommend the Fate SRD Stunt Maker for some great brainstorming ideas, though they can be vague enough to seem contradictory at times.

One thought on “The Horrors of Fate Stunts”

Join 320 other followers
My Tweets